Provided that a quartz crystal performs to its specification, few of us are worried about how it’s made, or even exactly how it works. But there are times when it can be useful to have a grasp of the basics, if only to be able to dismiss some of the more exaggerated performance claims found in data sheets.

Wafers from which crystals are made for electronics applications are cut from quartz stones. The direction of cut determines the vibration mode of the crystal, its frequency-temperature characteristics, how it will age, and various other parameters.

Some 90% of all crystals used in these applications are so-called AT-cut. This means that the stones are cut at an angle of 35 ° 15’ from the Z-axis. The AT-cut is popular because of the temperature characteristics of the resulting crystals. They can be used from -40°C to + 125°C and have an inflection point – the symmetry point from which the frequency goes higher or lower with temperature – of 25°C. 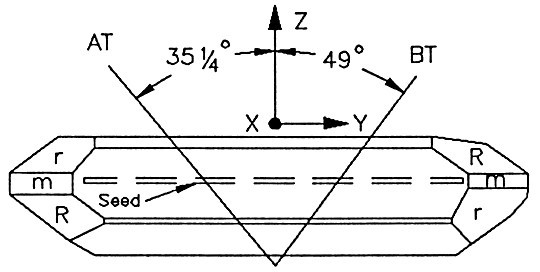 As with all electronic components, very close tolerance parts cost more than those with looser tolerances, primarily due to the more limited yields that can be achieved at tighter tolerances.

It’s interesting to note that the temperature-frequency characteristics of an AT-cut crystal are symmetrical. That’s why you’ll see specifications for crystals quoted as being from 0°C to 50°C, -10°C to + 60°C, -20°C to +70°C etc. These specified temperature ranges are all symmetrical around 25°C. It follows that the ‘industrial’ temperature range of -40°C to +85°C, often used to characterize other electronic components, including semiconductors, is not the most appropriate way to specify a crystal. The nearest equivalent temperature range that would be appropriate is -40°C to +90°C. So, if you see a reference design that demands a crystal with ±10 ppm stability from -40°C to +85°C, treat it with caution. We’ll explore this issue a little more in our next blog post.

The AT-cut crystal was 80 years old last year. Messrs. F.R. Lack and G. W. Willard discovered it in 1934, along with its BT-cut counterpart, while working at Bell Telephone Labs, part of AT&T. The pair, together with a colleague, Mr. I. E. Fair, published a seminal article on crystals entitled “Some Improvements in Quartz Crystal Circuit Elements” in the July 1934 edition of the Bell Labs Technical Journal. You can obtain a copy from the Wiley Online Library here. 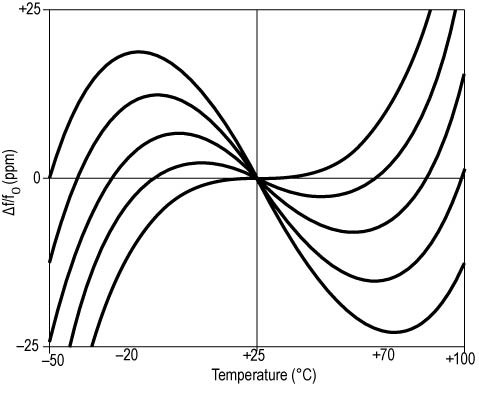