Over the years we’ve had many requests for quartz crystals that operate from -40 °C to +85 °C with ±10 ppm stability, despite the fact that nearly all of the applications discussed with our customers didn’t need to operate over this industrial temperature range. It seems that the perceived requirement does not arise from considering the application but from the data sheets of semiconductor manufacturers; the chips are specified to operate from -40 °C to +85 °C and reference designs then suggest that crystals, and other components, should be capable of doing the same.

Now, it’s possible to buy crystals that meet the specification described but the fundamentals of crystal manufacturing make them prohibitively expensive for all but the most demanding applications. Here’s why.

As we described in an earlier blog post, large stones are cut into small wafers to make crystals and the operating frequency of a crystal is invariably quoted at 25 °C. We vary the temperature characteristics of the crystal by changing the angle at which we cut the wafer. 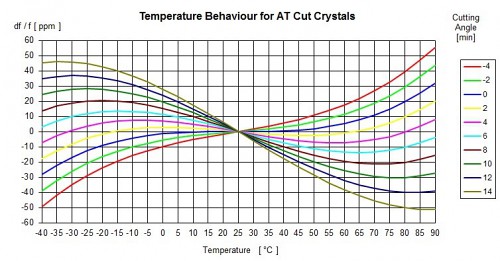 Even when using the most appropriate cutting angles, the yield of crystals that will stay within ±10 ppm over a temperature range of -40 °C to +85 °C is small. As a result, the cost of these crystals is relatively high – prohibitively so for many consumer, commercial and Internet-of-Things (IoT) applications.

But, you may say, “I’ve seen cheap crystals in distributor catalogues that claim ±10 ppm stability from -40 °C to +85 °C.” We’ve bought a selection of these components and tested them exhaustively. We’ve yet to find a single low-cost crystal that fully meets the specification; some get close but they always outside the ±10 ppm specification at the lower end of the temperature range.

Of course, some manufacturers simply don’t have the facilities to test crystals accurately and rely on quoting approximations. To reiterate this important point: you can buy a crystal with ±10 ppm stability from -40 °C to +85 °C, but it’s going to be a relatively expensive component and rarely one that’s optimal for your application.

We’ve been in the crystal business for over 40 years and we will only ever publish accurate, honest specifications that are proven in exhaustive test procedures.

Our advice is always to think about your individual application first, rather than just relying on chipset manufacturers’ reference designs, which are by their very nature generic and often inaccurate. Then talk to our Engineering and Application Support Team, who will always point you towards the most economical crystal or oscillator for your design. As the old adage says, “You don’t need a sledgehammer to crack a nut.”